CUBE Tech Fair 2018: When a prince and a rapper talk crypto 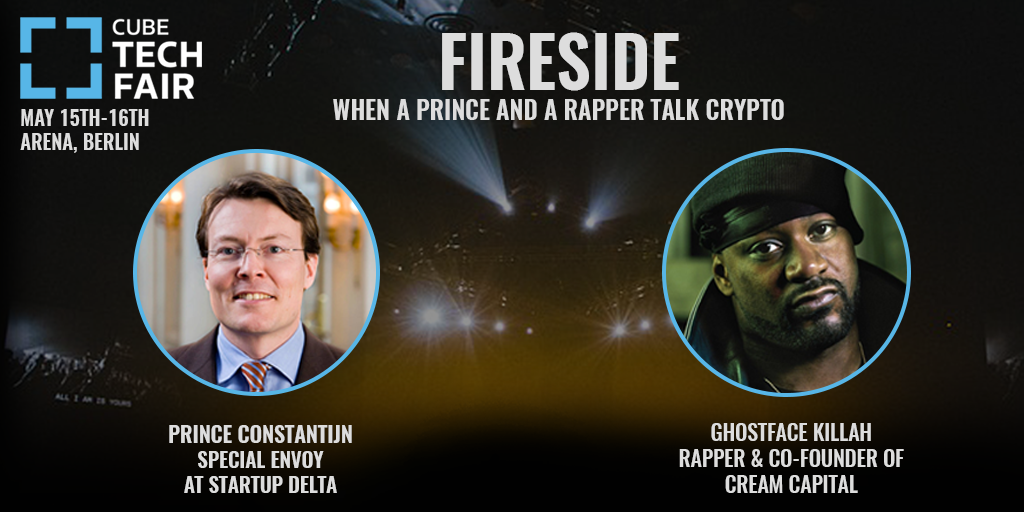 After welcoming actress Robin Wright last year, in 2018, CUBE Tech Fair pairs the most unusual speakers to talk Crypto on stage: A member of the the Dutch Royal Family and a Staten Island “hook-heavy rhymer”: Prince Constantijn of StartupDelta and Wu-Tang Clan’s Ghostface Killah.

Adding up to the line of celebrities who have put their names behind ICOs, Ghostface Killah co-founded the cryptocurrency venture Cream Capital. Cream Capital is building the world’s largest cryptocurrency ATM network and the first Ethereum-based dual token system. $CASH & $CREAM. After announcing the fund in October 2017, the rapper will talk about it for the first time publicly at CUBE Tech Fair. Prince Constantijn of StartupDelta will interview Wu-Tang Clan’s Ghostface Killah on the main stage at 10:20 am.

With Ghostface Killah, CUBE Tech Fair welcomes another blockchain enthusiast in Berlin. The conference will cover blockchain topics from cryptocurrency to IOT. More than 20 blockchain experts will talk in Berlin on May 15th and 16th. Among them Arifa Khan, the Founder & CEO of Himalaya, a stock exchange platform on the Blockchain that would run on smart contract algorithms and later use machine learning and AI; Arwen Smit, the Co-Founder and CMO of DOVU, focusing on the benefits of blockchain in the mobility sphere; Slock.it-CEO Christoph Jentzsch; Harald Zapp, the CEO of the company Next Big Thing AG developing two blockchain ventures right now, or Lucas Pinsdorf from Mercado Bitcoin, the worldwide Top 50 Cryptocurrency Exchange based in Brazil.

Dr. Torsten Oelke, Executive Chairman of CUBE and himself a Blockchain Investor adds:  “Blockchain is disrupting society as the internet did 25 years ago. After web 2.0 and mobility, blockchain – based on trust and transparency – will mix the cards new. New players will emerge, new business opportunities will arise – and the role of the consumer will change. You will see the real blockchain use cases at CUBE Tech Fair 2018.”

CUBE (cube-global.com) is a global ecosystem dedicated to bridging the gap between top B2B startups and major industry leaders. With a deep understanding of startups and corporations, and their vastly different cultures, CUBE connects these unlikely partners through a network of touchpoints worldwide, and acts as the most efficient B2B matchmaking service available.

Through a year-round program CUBE also offers industry and startups a space to collaborate via its Cooperation Space in the heart of Berlin. The Highlight event of the year is the CUBE Tech Fair, which brings global visibility to the most important industries in startup innovations by promoting projects between leading industry players and startups.

CUBE was launched in June, 2016 with Dr. Torsten Oelke as Executive Chairman. Among the global founder partners are Bayer, Dell, Messe Berlin, and VW.